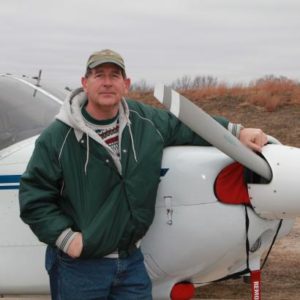 Brad Frederick’s son taught him to fly. You read that right. The Michigan native says, “At age 55, learning to fly from my son Ed remains one of the absolute highlights of my life.”

Brad loves aviation so much he bought a closed airstrip in Sidnaw, MI, a remote area in the western Upper Peninsula. He reopened the historic airstrip to the public and now operates Prickett Grooms Airfield, (6Y9) along with a community museum. He enjoys most any outdoor activity but the three at the top of the list are fishing, flying and cutting grass on an airstrip – a duty he learned from his upbringing on a small farm. He and his wife “Diz” now live near Grand Rapids. They have three children.

After joining the RAF in 2011, Brad was asked to become a member of the MDOT-Aeronautic GA Committee. He also serves on Michigan’s Dept. of Natural Resources advisory panel, managing northern Lake Michigan Islands.

He plans to retire from his day job to work more on opening airstrips, promoting aviation and building relationships that fulfill the RAF mission.

“I have gotten so much enjoyment out of RAF projects I’ve worked on so far, I hope I can give back more than I’ve taken, if that’s even possible,” he says.