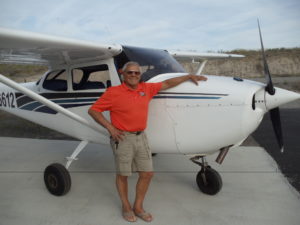 Dave was born and raised on an Indian Reservation in E Washington, he learned to love and respect the outdoors- camping, hunting, fishing and working. His father owned and operated a logging company which he worked for while going to high school and college, learning the value of hard work and being independent. While in college, Dave’s father encouraged him to get his pilot’s license, saying that GA was the future. After graduating from the Univ. of Washington, he moved to Alaska to experience the ‘Last Frontier’, and to hunt and fish the wilds. He moved back to Washington after 4 years to take over the logging business, managing it for 15 years before he moved into construction management as a Project Superintendent and for the last 20 years, working for a tribally owned construction company.

He is single with 3 grown children, and as they grew, he got back into flying seriously, buying his (172) and building his hangar (his second home… first = airport bum).

Dave’s love of camping drew him to look for places to fly and camp; then, several years ago, he heard about these guys, who were coming to Spokane for a presentation at the WPA meeting. The RAF! He went; listened; was hooked; met John McKenna, Bob Kay, and Chuck Jarecki that night; and joined immediately. Since then, he has enjoyed some of the most memorable trips and met the best of the best fellow pilots (and their partners) at numerous RAF outings, work parties and conferences.

Dave says, “It’s becoming quite an enjoyable ride, one I hope to continue for many more years”!