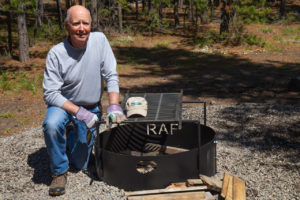 Jack was introduced to flying in 1989 by son Devin, who began washing planes for flight time at age 13. Before long, Jack, his wife Patricia, and Devin were all licensed and flying as one another’s co-pilots on weekends, vacations and then college shopping.

When Devin began flying for the Navy, Jack and Patricia left flying to see the world in their sailboat. During this time, Jack served as board member and president of another 501(c) organization with a worldwide cruising membership. After 53 countries and 11 years, they returned to the U.S. and also to flying aboard a Grumman Tiger.

At Sun ’n Fun in 2012, they pitched a tent and stumbled onto the RAF. Their goals of “adventure travel” by aircraft so perfectly matched the RAF mission that Jack became the Florida State Liaison and helped bring several airstrip projects to fruition.

After serving in that role for four years, Tylers joined the RAF Board, and Patricia served as an RAF “Vice President of Appreciation”.