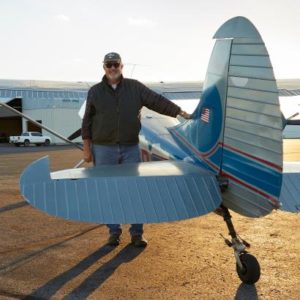 Jeffrey grew up in rural New Jersey near the Delaware Water Gap. His father exposed him to flying at 15 with an introduction to Ernie ‘Pete’ Billows at Trinca Airport in Northern New Jersey.  Jeffrey soloed on his 16th birthday in a J-3 Cub on skis, landing in a cornfield. “After a year of pumping gas and washing airplanes to help pay for lessons, I passed my Private at 17 in a 50’s Cessna 172,” he said.

During college in upstate NY, he became involved with competitive sailing and Architecture School. After college, he continued sailing on Chesapeake Bay while starting his Architecture career and family.

He resumed flying in his late thirties after moving from Baltimore to Louisville, KY. Thanks to the flying club at Bowman Field, he earned his Instrument Rating in a Piper Warrior.

“We purchased a low-time Arrow and I enjoy flying it around the region. I also spent a great weekend on Lake Champlain earning my Seaplane rating,” Jeff adds.  “I look forward to cross-country flights in the Arrow and working with my new friends at the RAF to advocate for Kentucky’s small grass strips.”