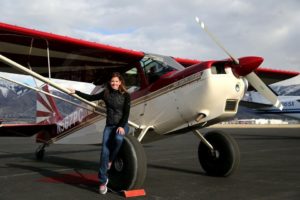 Lori grew up the youngest (with a twin sister) in a large aviation family. Her father served as navigator on a B-29 during WWII, and later piloted his family around the country in a PA-11, a Skywagon, and a Piper Navajo. Her childhood was filled with Sunday afternoon flights in the PA-11, flying the C-180 to visit older siblings who were in college at the University of Wyoming, and accompanying her father on business trips and travels to many destinations.

When Lori and her husband Joe welcomed twin daughters into their lives, she wanted to introduce her own family to flight. She earned her private pilot certificate in 2013 and became owner of her Citabria Explorer 7GCBC soon after.

Lori enjoys backcountry flying, occasional loops in her Citabria, and anything to do with aviation. A former teacher and archivist at the University of Wyoming, Lori now spends her time raising her daughters, working to reestablish her local airport in Upton, serving on the school board, and scouting for grass airstrips to land her plane.

She looks forward to advancing the RAF mission and is excited to explore opportunities for more recreational use strips in Wyoming.