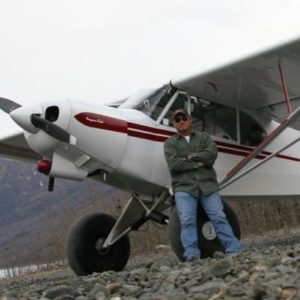 Ray grew up on a family farm in southwestern North Dakota and moved to the Black Hills of South Dakota in the late 80s where he met Laura, the love of his life. Laura and Ray now live in Spearfish and have two daughters.

Ray learned to fly in a Cessna 150, then bought a C-172 in which he earned his instrument and commercial ratings. In 1996 Ray started an Aerial Application business based in Sturgis, SD and expanded into banner towing, flight instruction, wildlife surveys, and aerial predator control. In 2001 Ray and Laura purchased Eagle Aviation, Inc. at Spearfish and offer flight Instruction, charter, maintenance, and the full complement of FBO services. Ray currently owns and flies two Cessna 172s, a 206, and a recently rebuilt SuperCub, and flies corporate turbo props.

Ray’s passion for backcountry aviation began after several flights to Alaska and into the backcountry in the lower 48. Ray is a Life Member of the South Dakota Pilots Assoc. and understands the need for advocacy groups that support and foster aviation interests. Through Ray’s involvement with SuperCub.org, “that bunch made flights into the Missouri Breaks strips,” Ray said. “Pilots experienced firsthand the results of hard work and efforts by the RAF and MPA to re-gain access to this beautiful piece of paradise.”

“Through these aviation activities, many friends have been made and campfires shared,” he says. “I always have time to visit with like-minded individuals and look forward to meeting other RAF supporters as well as recruiting new interest to further the RAF mission.”