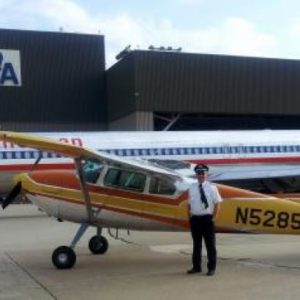 Steve Thompson was raised on a farm in southern Oklahoma. He was born in 1966 and since his earliest memories he knew what he wanted to do. Fly Airplanes. At age 14 his dad introduced him to a coworker that was in the Civil Air Patrol and soon he started taking flying lessons.  By age 16 he partnered on a 1956 Cessna 172. Not until he left the airport did it occur to him that maybe he should have bought a pickup or car first? Because he borrowed his parents farm truck to go to the bank and airport that day he did not have his own transportation to get to the airplane he had just purchased. After high school he worked as a heavy equipment operator and went to college at night while he finished up more ratings. Steve has been flying corporate and commercial aircraft ever since to support his love of flying. He enjoys traveling with his son and friends, camping, hiking, fishing and meeting great new friends along the way all over the country. Steve says, “The type of flying we do is truly one of the great freedoms we have in this country and let’s continue to protect it for our use and those of the next generation”.