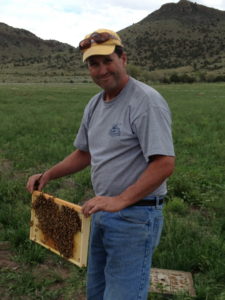 Tom was intrigued with flying from the very beginning as a child, in a family whose business was beekeeping in southern Colorado

“I worked in the business through high school then – being a typical teen – I couldn’t wait to get out into the world,” Tom says.

He earned his first flight ratings at a small college in northwestern Colorado. His first flying job came along in 1986 as a flight instructor in central California. Tom recalls his best job was an air tour and charter pilot for ten years in Page AZ, the last four years as Chief Pilot. Trips often put him in and out of small dirt strips around Page and the Grand Canyon. Flying De Havilland Twin Otters, it’s easy to see why this kind of flying became Tom’s favorite.

He met Laura, “the love of my life,” in Page. They started a family and decided flying airplanes and raising kids weren’t the best mix. They moved back to Colorado in 1996 to help with the family bee business.

But three years later, aviation called him to serve again. The bee business was in decline, so Tom took a First Officer job on a Boeing 737 with Frontier Airlines . He says it was to supplement their living, but it also satisfied his longing to be back in the skies.

After the September 11 tragedy, he quit flying for the airline to raise kids and bees.

“Besides the family, my biggest passion is backcountry flying and camping,” Tom says. He keeps his instructor ratings current and conducts flight reviews and tailwheel checkouts.

“It has been wonderful to be able to teach the boys, John and Luke, to fly. Emilee is next  . . . as soon as she can reach the pedals!”

The next time you see Tom, he’ll be wearing the signature RAF orange shirt. He may have either a pulaski in his hands, or a tablet computer signing up new RAF friends!