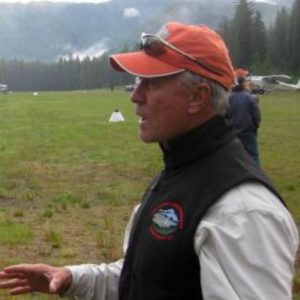 Wayne was born on a sugar beet farm outside Sheridan, Wyoming in 1946 and did not experience running water or electricity until the age of 10 when he moved to Southern CA. Wayne attended high school and college in CA where he soloed in a Super Cub at the age of 17.

He became a flight instructor for less than a year before he got a job flying checks and finished college with a BS in Math. Next aviation stop was Kwajalein Atoll in the Marshall Islands flying C-54’s and Caribou’s as a civilian for the US Army. After two years on a very small island Wayne got the break he always wanted and was hired by Western Airlines in 1970. He retired from Delta in 2003 after flying in six different bases and eight different Boeing and McDonnell Douglas aircraft. What a great gig it was.

After he retired he built his second experimental aircraft in 7 months and flew it to OSHKOSH.

Wife Cindy and Wayne moved to St George in 2005 to get away from the Salt Lake weather and be close to the kids, grandkids and Cindy’s parents.

Wayne missed organized flying so he trained in the 747-200 and flew to and from the Haj in North Africa, based in Jeddah.

When Wayne turned 60 Net Jets hired him as a pilot on the Hawker 800XP, and he enjoyed that for 3 years.

Now flying is limited to a few hours a month in an amazing Eclipse Jet, his F-1 and a just completed homebuilt Breezy.

When not hanging around an airport Wayne might be losing golf balls on his home course in St George or biking around Snow Canyon, Utah.