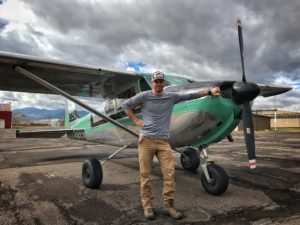 Evan got his first GA airplane ride about the age of 12 in a Mooney, followed by some actual

stick time in a home built Pietenpol, “which sunk the hook deep,” Evan says. He began flight training in 2013, and after some hard work and dedication, he got his license, “and the real adventuring began.”

In 2014 with 90 hours in his logbook Evan left home for Idaho, flying a 100hp Zlin Savage Cub.  “The Idaho backcountry sealed my fate as a lover of the American west and backcountry destinations,” Evan says.

Throughout his twenties, he worked as a forester in central West Virginia.  Working outdoors with landowners, loggers, log buyers, and state agencies laid the groundwork for his position as a Land Man for an oil and gas operator in West Virginia. There he honed his negotiating skills in attaining midstream assets in the Marcellus and Utica shale play of the Appalachian Basin.

Now Evan flies his 1957 Cessna 182A all over the country, having landed in 26 states and counting.  He participated in the Ryan Field work party in 2017, “and there, I felt a calling to do more with the RAF,” he said.

When not flying, he can often be found working on his own airstrip project, Checkpoint Charlie, in Lowell, Ohio; or his side business “Off Airport Gear”, making clothing, producing videos, photography, and custom logos for aviation related businesses.

“West Virginia is under-represented as a recreational aviation state,” he says. “There are tremendous opportunities here – fishing, hiking, backpacking, camping, skiing, and hunting . . . ‘West By God Virginia’ is an outdoorsman’s paradise.”

“We just need someone advocating for what we love here in West Virginia and to open up new opportunities for those who love aviation and the outdoors.” he says. “Hopefully, we can do just that!”