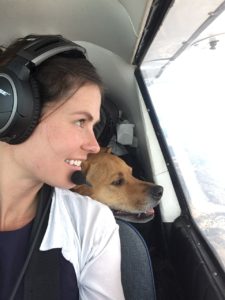 Originally from Russia, Katerina lives and works out of a small airport in Santa Paula in southern California. Along with a team of engineers based in Silicon Valley, she is growing a start-up that is building an electric aircraft that will help first responders get to the scene of an accident in remote areas quicker and safer.

A former aerobatic competition pilot, she now flies her modified Piper Colt all over the West.

Katerina is excited to spread the word about the RAF’s mission to the GA community and beyond, encouraging people to use aviation as a sustainable way to get in touch with the great outdoors.

She is passionate about how aviation facilitates public land access, exploration, and adventure. She hopes that as more people discover the freedom of aviation, they grow a deeper connection to our land.

Katerina can be reached at kbarilov@theraf.org.