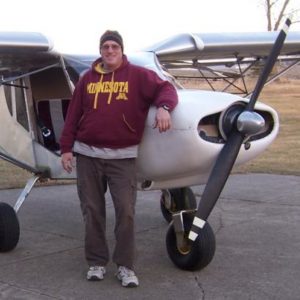 Kirk Hiner, who lives in Kenyon, MN, grew up in an aviation family thanks to his dad who flew B24s out of England during World War II and then continued to fly after the war. Kirk received his private pilot license in 1976, and his commercial, instrument and CFI ratings in the 80s. Over the years as lifelong EAA members, Kirk and his dad have built 5 kitplanes together (three of which they still own) and Kirk continues to give flight instruction from time to time. Along with being a small business owner, he and his wife have three children, so having extra time on his hands is not one of his biggest problems. Despite that, he still finds time for two of his biggest interests, flying and the outdoors (fishing and hunting). When Kirk found out about the RAF mission, he wanted to get involved because he witnessed firsthand the closing of the airport where his family cabin is located. As the Minnesota liaison Kirk looks forward to helping the RAF’s mission to protect these remote airstrips from closure.