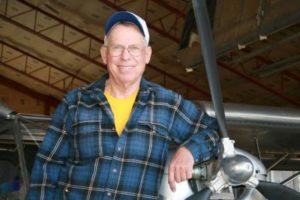 Richard “Rick” Lach, from Kernville, CA, has had a passion for aviation from an early age. He can recall riding his bike to Van Nuys Airport, where he would sit on the railroad tracks and watch planes land. After joining the Air Force he spent four years maintaining F-100, F-101, and F-105 in the Far East. In 1998 he decided that his high-end Computer Communication business wasn’t for him anymore, and sold out to buy a Lodge in Alaska. Amongst the wilderness his new venture had a bar, restaurant, rooms, cabins and a 200 foot landing strip. All this cozied up adjacent to Wrangle St.-Ellis National Park, in the village of Chistochina. Unfortunately it burned to the ground two years later, at which point Rick, with his wife Holly, came back to California and the Kern River Valley. Rick then decided that he would get serious about aviation. He started Raven Aviation and acquired an STC to convert Piper PA-22s back to taildraggers. He then acquired his FAA/PMA approval to manufacture components for himself and other STC holders in Alaska. He is also a Certified Light Sport Repairman and a Rotax technician. His passions soon were centered on backcountry flying and smaller airports. Then the ultimate opportunity came his way. The small mountain airport in Kern River Valley where he lived needed a new Airport Manager. He jumped at the chance, and now the BIG KID runs the candy shop, as he would say, taking full advantage of the high mountains, flowing rivers and lakes, desert scapes, and great weather. With nothing but toys to work on and fly, he’s in heaven. So when you stop by the airport or call, be prepared to talk backcountry flying or working to open old and new airstrips in California.