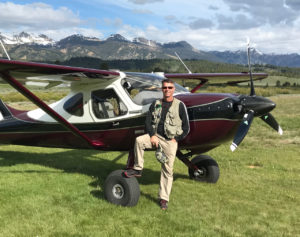 Tim is a native of upstate New York. His introduction to aviation was as a youngster in a Beaver on floats on the lakes in the Adirondacks. He has lived and traveled around the world during a career in the data networking and security industry.

Starting with hang gliders and paragliders, Tim has flown foot launched gliders thousands of miles across California, Nevada, and the Western US. “You never knew where the day was going to end, but it was guaranteed to be an adventure. You might even share a few thermals with a condor or hawk along the way,” he says.

As the kids grew, Tim switched to airplanes to share the joy of flying with his family, accumulating over 30 years of recreational flying experience. “From Baja to the Florida Everglades, from Mount Rushmore to Niagara Falls, recreational aviation is an incredible way to see the country,” he says. Tim’s additional aviation pursuits included owning a flight school and maintenance shop, providing flight instruction, and selling new and used aircraft.

Tim’s wife Janette is also a pilot and they are based in Driggs, Idaho, where he serves on the Driggs Reed Memorial Airport board. The couple enjoys spending time outdoors, hiking, kayaking, skiing and especially backcountry flying and camping.

“By far, over the years, the best thing about flying has been the incredible number of kind and generous people we’ve met,” Tim says, adding, “the RAF is the epitome of this flying and family spirit. It is a privilege to work with such a group on preserving access for everyone to enjoy.”