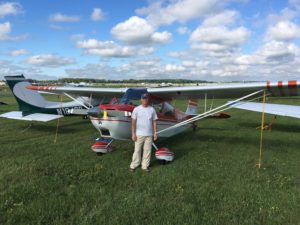 There was an Aeronca Champ on the family farm in south Alabama where Dan was raised. “My dad got his pilot’s license while at Auburn University in the late 60s,” Dan says. He flew it from their grass strip overseeing the row crops, pecans, fruits and vegetables, and hog and cow operation during Dan’s younger years.

Dan graduated in 1996 from Auburn with a Mechanical Engineering degree and worked in the Chemical Industry for about ten years. He transitioned to outside sales for an equipment company, and now serves the chemical, pulp/paper, power, and other industrial manufacturers.

A few years ago, Dan’s father purchased a different Champ and he and his dad put some time in, flying it together. After about 20 hours, “it definitely got me hooked,” he says. Dan earned his private pilot license in 2015. They sold the Champ and upgraded to a 7GAA Citabria. “Since then I have enjoyed weekly sunset/sunrise cruises, camping trips, and some vacation travel,” Dan says. “One of my highlight trips was flying to Oshkosh with my dad and landing on the green dot at Wittman Field,” he adds.

“I first started following the RAF on Facebook, then met some State Liaisons at the Tullahoma AOPA Fly-in,” Dan says. “I’m interested in meeting, networking, and working with other RAF members on projects and back country/low and slow flying opportunities.”