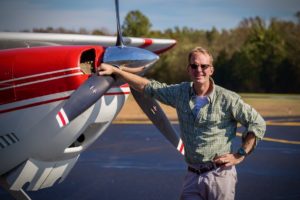 Todd, a Wichita native, began flying while in high school. After taking a 30 year break to raise kids and see them off to college, flying was again at the top of his to-do list. He started re-learning tailwheel skills after acquiring a yellow Cub.

While working on a land clearing timber project near Beaver Lake in Arkansas, it occurred to him during the 230-mile drive south, “why not make a backcountry strip and just commute from home in Kansas City with the Cub?”

One project led to another, and there are now four strips at Banks Ranch, 62AR, described in Airfield.Guide as “a fantastic complex of four airstrips, each with its own personality and level of difficulty. It’s like a water park for backcountry flying.”

Semi-retired from an Investment Management and Engineering career, Todd takes time to enjoy backcountry adventures of any type and keeps farming and ranching. Eager to continue the RAF’s mission, he hopes to get Kansas on the map with new recreational airstrips that rival those in Arkansas.